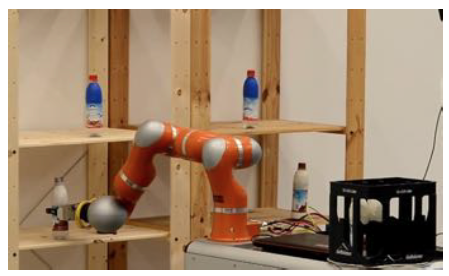 Link to the paper
Link to Laura Antana’s researchgate page

I hereby again recall that this work is not mine, but the one of:
Laura Antanas, Plinio Moreno, Marion Neumann, Rui Pimentel de Figueiredo, Kristian Kersting, José Santos-Victor, and Luc De Raedt.
I simply try to make a complete summary, that is easier to quickly read than the original paper. Thanks for the authors for contributing to science in such an incredible manner!

The framework architecture on a cup point cloud example:

Contribution: Probabilistic logic module that semantically reason about the most likely object part to be grasped, given the object properties and task constraints.

Benefits of the approach:

The authors refer to Gibsonian’s definition of affordance, concentrating on possible actions of an object.

They try to tackle the research question:

Does semantic high level reasoning help to select a better grasp if the next task is known?

Goal: use the PLM to help the grasp planner by reducing the space of possible final gripper poses

Logic offers a natural way to integrate high-level world knowledge such as:

Because descriptions of the perceived world are uncertain (e.g., not all cups look like the ‘prototypical’ cup), we consider probabilistic logic which allows reasoning about the uncertainty in the world.

The main features of the PLM include:

Given the input observations, it is able to reason about the grasping scenario. It can (re)predict and improve the category of the object via the semantic object categorization model. Further, the module can answer queries
about the most likely task and most likely object part to grasp, given the task (denoted as pre-grasp).It uses probabilistic visual observations about the object provided by the first module, evidence about the task and world knowledge such as object/task ontologies and object-task affordances.

Once we have identified the most likely pre-grasp, the framework calls the third module, which solves the problem of planning the grasp execution by using local shape features of the object part and completing it on the robotic platform

The vision module detects symbolic parts top, middle, bottom and handle.
Global object similarity helps to complete the scene description with a prior on object category (cup = 0.56, can=0.35 and pan=0.05). The PLM gives a new distribution (cup=0.98 and pan=0.02), due to the handle.

Object task affordance and world knowledge have the PLM predicting the tasks pass, pick-place, and pick-place inside upright with the same probability.
For

Most grasping methods consider mainly visual features to learn a mapping from 2D/3D features to grasping parameters. A major shortcoming is: it is difficult to link a 3D gripper orientation to solely local image features.

However, for global information, we need the complete shape of the object. We need shape completion, that is complicated to get when single view available (time efficient, …).

An interesting method, from Thrun and Wegbreit, takes advantage of symmetries (5 basic and 3 composite types of them). Partly based on this work, Kroemer et al. propose an extrusion based approach able to deal with shapes not handled by symmetry-based approaches (but not yet suitable in real-time).

Other approaches use prior such as the table-top assumption, or decompose the CAD model into geometric primitives and define rules for them.

Here we implemented an efficient shape completion approach which translates a set of environmental assumptions into a set of approximations, allowing us to reconstruct the object point cloud in real-time, given a partial view of the object.

Task-dependant grasping is mostly done by learning a direct mapping function between good grasps and geometrical and action constraints, action features and object attributes. A part of this work focuses on Bayesian network learning to integrate symbolic task goals and low-level continuous features such as object attributes, action properties and constraint features.

We here exploit additional object/task ontologies using probabilistic reasoning and leverage low-level learning and semantic reasoning. This allows us to experiment with a wide range of object categories.

3 Statistical Relational Learning for robot grasping and other robotic tasks

Probabilistic relational robotics is an emerging area within robotics that aims at endowing robots with a new level of robustness in real-world situations. Probabilistic relational models have been used to integrate common-sense knowledge about the structure of the world to successfully accomplish search tasks in an efficient and reliable goal-directed manner.

In probabilistic planning, relational rules have been exploited for efficient and flexible decision-theoretic planning and probabilistic inference has proven successful for integrating motor control, planning, grasping and high-level reasoning.

Symbolic reasoning enables the robot to solve tasks that are more complex than the individual, demonstrated actions.

These approaches successfully intertwine relational reasoning and learning in robotics. However, none of these frameworks solves the generalization capability needed for task-dependent grasping following a semantic and affordance-based behavior.

We propose a probabilistic logic framework to infer pre-grasp configurations using task-category affordances. Our approach features semantic generalization and can tackle unknown objects. This research topic has great importance in robotics as robots aimed at working in daily environments should be able to manipulate many never-seen-before objects and to deal with increasingly complex scenarios.

The visual module is used to obtain a semantic description of the perceived objects in terms of their pose, symbolic parts and probability distributions over possible object categories.

An ideal model, considering object semantics, shape, affordances, motion planning and the task being performed on it, should consider both discrete and continuous variable, while dealing with uncertainty.

As in small households spaces (as kitchen), space is limited, the work is here driven by the motion planning constraints. As a result:

The object symmetry assumption allows us to apply shape completion algorithms. Then, using the shape-completed point cloud, we segment the object into its parts and assign them a semantic label (in top, middle, bottom, handle and usable area). This reduces the search space for robot grasp generation, prediction and planning.

Computing the bounding box of an object is an ill posed problem due to lack of observability of the self-occluded part. However, the actual bounding shape provides a large set of reaching poses (i.e. pre-grasp hypotheses), which lead to successful grasping.

We propose an approach that translates a set of assumptions and rules of thumb observed in many daily environments into a set of heuristics and approximations:

These constraints model perfectly simple box-like and cylinder-like object shapes, such as kitchen-ware tools, and are reasonable assumptions for many other approximately symmetric objects, such as tools. The heuristics allow us to reconstruct the unobserved part of an object point cloud in real-time, given a partial view.

The next figure illustrate cases where these asumption apply:

Thanks to these assumptions, they are able to reconstruct the unobserved part of an object point cloud in real-time, given a partial view, as the ones on this figure: 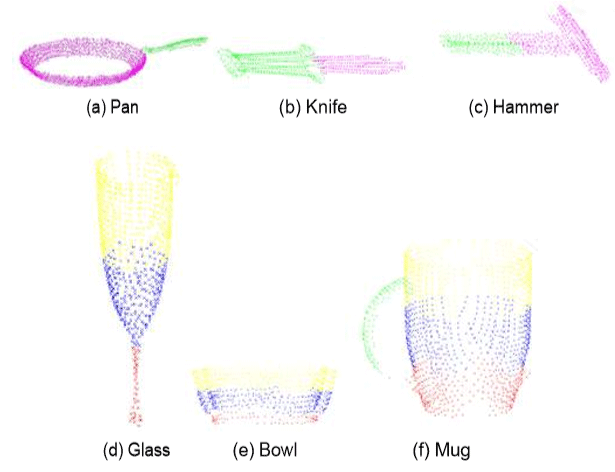 They use PCA to find the main geometrical axis. Then to identify the parts of the object:

They use line reflection symmetry, that better copes with the object categories they consider, they use bounding boxes to define pre-grasp hypotheses: two hypotheses by face, as illustrated hereafter: 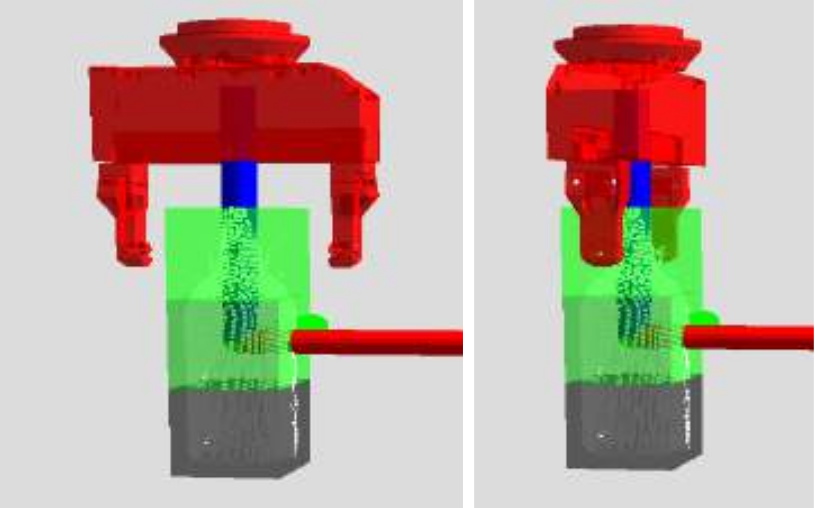 The set of pre-grasp poses is used by the low-level grasp planner for local-shape grasping prediction and motion trajectory planning.

They provide their software implementation and the ROS node for object pose and part segmentation here.

From the completed point cloud and its semantic parts, they estimate its pose, category and containment.

“We obtain the distribution on object categories for a particular object by retrieving the objects in an object database being most similar in terms of global shape and semantic part information. We represent the objects by labeled graphs, where the labels are the semantic part labels derived by the visual module and the graph structure given by a k-nearest neighbor (k-nn) graph of the completed object’s point cloud. For each completed object we derive a weighted k-nn graph by connecting the k nearest points w.r.t. Euclidean distance in 3D.”

The nodes have five semantic labels encoding object part information top, middle, bottom, handle and usable area. The similarity measure among objects is a kernel function over counts of similar node label distributions, per diffusion iteration. We consider a maximum number of iterations.

I guess using neural networks on a 2D image should be something more efficient for categorisation.

Object containment: In our scene description we additionally consider observations about the object containment. It can be estimated by comparing top visual images of empty and full objects (opened containers) or by observing human (or humanoid) lifting and transportation actions (closed containers). We assume either that the containment property is not observed (e.g., for tools), the object is empty, or the object is full, with a certain probability.

This is for me something to work on, a tool should not have a containment property “not observed”.